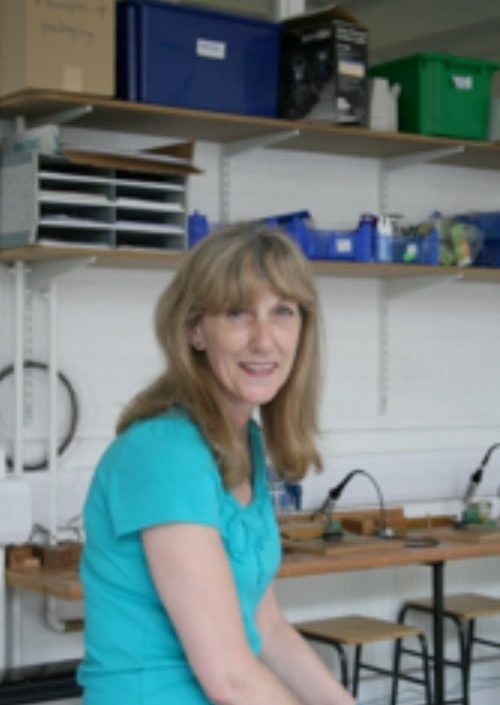 "Mrs Jan Angerstein, DT teacher at Streatham & Clapham High School, retired in 2010 after an association of fifty years with SCHS."

Jan Angerstein, DT teacher, retired in the summer of 2010, leaving the school she joined as a pupil in 1960. When her family moved to London from Winchester, she joined Streatham Hill and Clapham High School Junior Department, then situated in Palace Road. She describes herself as a “real country bumpkin” and was very nervous at her interview, but was made to feel welcome by the Head, Miss Simmons. She took the entrance exam to the Senior Department, then based at Wavertree Road, now the school’s Junior Department. It boasted a two-storey gym; the top floor was later turned into a spacious Art Studio. The Head, Miss Macaulay, had a reputation for being very severe; discipline was strictly enforced, the Maths teacher shouted a lot, and the girls had to move around the school in complete silence. Detentions were handed out for talking!

Jan’s love of cookery and dressmaking began in lessons at SCHS. The curriculum was different; every girl learnt French, some took German, and there was no IT. Girls in the Sixth Form wore uniform, grey skirts, blouses and a boater. (When girls left the tradition was to “plant” the boaters on the poles outside the school building, but Jan could not bring herself to part with hers!) Jan left after the Sixth Form and trained as a cookery and dressmaking teacher in Bath, but returned to Streatham again after she got married as her mother still lived in the area. She happened to see an advertisement for a teaching post at SCHS Senior Department, and came back to teach. The Headmistress was her old Head, Miss Wulff, and five or six of the staff who had taught her were now her colleagues, which she says she found a little strange to start with!

This was the start of a long association with the school which spanned half a century with only a couple of short breaks for child raising and an office job. Jan was a Domestic Science teacher and a DT teacher, re-training in woodwork, electronics, and pottery. She was an excellent cook – her cakes are legendary – and was renowned for the fantastic costumes she made for school productions (her favourite was the exotic Arabian Nights, although she remembers having to make 25 period costumes with corsets and bustles for one production!). She was delighted to see some of the costumes she made many years ago reappearing at the Year 8 Shakespeare Festival.

Jan had so many memories to take with her – the Centenary celebration at Westminster Abbey in 1987 for which she made a banner which was carried up the aisle by the procession, and the Albert Hall celebration in 1997. She taught five daughters of past pupils, but says she is glad not to be around to teach the granddaughters!

Jan retired to enjoy her hobbies; she has built a model four storey Georgian dolls’ house, and is intending to light it with candles (100 bulbs required!); embroider carpets (needlework!); make furniture (needlework and woodwork!) and bake some miniature cakes (cooking!).