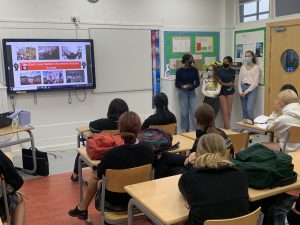 By Alicia Carter (L6)
To begin the new Michaelmas term, the Modern Foreign Language students of the Lower Sixth were challenged to create an innovative tribute to the annual European Day of Languages, which is celebrated on September 26th.

Following the pivotal moments of this year regarding race and equality in society, we thought it was imperative that we gave a place for the Black Lives Matter movement to be rightfully discussed by SCHS pupils. Our aim was to demonstrate how our European neighbours participated in the movement, in order that the younger members of our school continue to understand the importance of the BLM movement and anti-racism in the European countries and languages studied within SCHS.

Devastatingly, once again, this year, many black people were victims of police brutality world-wide. The deaths of George Floyd and Breonna Taylor in the US sparked the BLM movement, yet their murderers have still not been convicted. Despite these painful events, we L6 MFL students are loudly optimistic that these tragedies have encouraged more people to speak openly about the inequality of people of colour in today’s society. The global outrage and collective protests have enabled everyday citizens to support and re-educate others about why Black Lives Matter and we wish to take this opportunity to continue this message in light of European Languages Day 2020.

When researching anti-racism for the European Day of Languages 2020, it was amazing to see that many European countries held their own Black Live Matter protests to show their frustration towards the blatant discrimination faced by minorities. Awareness was created in a number of ways. For example, ‘Highsnobiety’: is a website that is dedicated to informing how people in Europe can get involved and help to support the movement further. It is important to address polyglottic Europe’s involvement because it shows that no matter what language you speak; we are all united by the same cause! 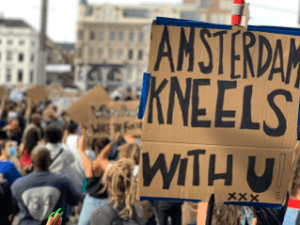 We all know that learning languages is a reap-awarding skill. Aside from encouraging appreciation of diversity and other cultures, did you know that learning a new language can help to improve memory abilities? It is a proven way of reducing one’s chances of getting dementia.

The other benefits are being explained to the whole school during the L6 MFL students’ virtual assembly this week. All SCHS pupils are welcome to take part in the T-shirt designing anti-racism/BLM/ European Day of Languages competition that was launched this week (deadline December 2020) It would be great if SCHS could win!

As for the MFL and all SCHS students, we hope that Europe will continue to stay united for any other international issues that the world faces, because if we stand together, all for the same cause our voices will definitely be heard.